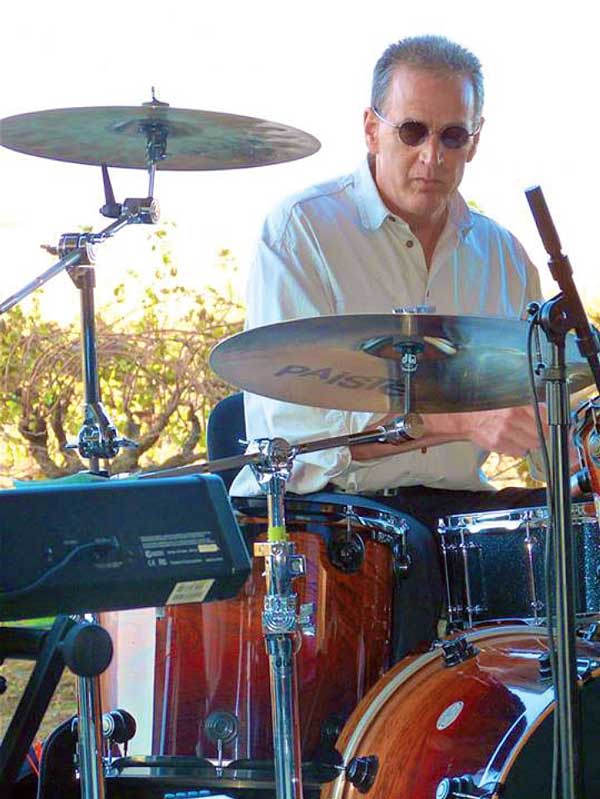 Steve started his professional career during his junior year in high school in his home town of  Orland, California performing in local classic rock and country bands. Under the instruction of Bob Burleson (Chico), Steve learned rudiments and latin beats, and more importantly, how to read music. Entering Shasta Community College Steve majored in music and performed with the big band, the jazz ensemble, a percussion ensemble, and even the symphony. Notably he competed with the SCC big band against similar big bands at the famed Reno Jazz Festival.

After relocating to the North Bay, Steve was joined the original Napa based pop/rock band, the PHOBICS, who garnered regional success with their catchy and progressive sound.  Later on Steve joined another original pop/rock band THE NEUTRALS who found similar success.  Steve has also filled in with veteran bands on the bay area scene as JOHNNY GUNN, the VOLKER STRIFLER band as well as raising the percussion bar in the original band LUCAS OHIO and the SHAMBLERS.

Always looking for a challenge, Steve delved further into jazz and latin styles by studying with a variety of teachers including Colin Bailey, Jimmy Robinson, Mike Curroto and Kwaku Dwade. This additional depth of knowledge allowed Steve to play with a wider variety of jazz/latin ensembles, among them, the HEARTBEATS (swing/r&b), the MICHELLE MICHAEL’s band (swing/r&b), OPUS ONE (swing). Steve began his blues career filling in with San Francisco based LITTLE WOLF and the HELLCATS. This led to getting picked up by the USED BLUES BAND who placed very high among the 2013 Memphis International Blues Challenge – a large battle of the bands event held annually. Additionally, USED BLUES BAND served as the back up band for the Harp-Explosion at the Monterey Blues Festival 2011 and 2012.

Steve keep his foot firmly in his country roots as the veteran drummer for Sonoma-based, J.D. BAUMAN and the BOOT BAND.

Of late Steve is branching out with the hard-edged surf-rock band called GUITARZILLA, led by Dick Dale alumnus, John Wheeler. Pursuing his love for funkier beats, Steve has teamed up with well-known vocalist, Kellie Fuller, in the band SOUL KAT, specializing in 60s-70’s R&B/Soul genres. Even more funk grooves are happening as Steve provides the locomotion for South Bay band, MAC ATTACK.

For over 10 years now Steve has been passing on his passion for drumming combined with his vast live performing experience at his own Drum Studio in Napa. He also enjoys setting up and renting out drum kits from his large arsenal of drumming equipment for concerts dates or recording sessions.